MINIMUM 375mg DHA PER SERVING – ESSENTIAL LEVELS OF OMEGA 3 – DHA supports cardiovascular health and is important for brain and visual health giving you the purest form of Omega 3 oil and all the Omega 3 benefits of fish oils without fish extract, no fishy after taste or fishy smell. Easy to swallow making them perfect for pregnant women looking for a safe source of prenatal DHA.

PREMIUM QUALITY GOLD STANDARD OMEGA 3 SOFTGELS – Whilst DHA is a structural component in human cells; EPA acts as the cell maintenance engineer, enhancing cell function as we age. The European Commission and the European Food Safety Authority have approved our Omega 3 Algae Oil. SAME BENEFITS AS REGULAR FISH OIL, WITHOUT THE FISH! Omega 3 benefits the heart, eyes, joints, and brain.

ASSURED HALAL & KOSHER – No Alcohol, No Pork, or Animal-derived Ingredients. No Gelatin as It’s impossible to guarantee no cross contamination with pork bones and flesh.

What is Algae Oil?

The benefits of omega-3 fatty acids have been well-researched and established. They’re known for being anti-inflammatory agents, and they help the body reduce blood clots.

Fish oils contain this omega-3s that are predominately made up of eicosapentaenoic acid (EPA) and docosahexaenoic acid (DHA). The fatty acids come from organisms that have adapted to the cold, such as cold-water fish. These fish obtain EPA and DHA by eating algae that have the flax-type omega-3s typical of plants; when the fish consume these algae, they then concentrate high amounts of EPA and DHA in their tissues. They’re also able to keep the membrane cells from becoming too stiff when exposed to frigid temperatures.

When the health benefits of DHA became well-known and doctors began recommending omega-3s to their patients, some issues surfaced. Using cold-water fish for its DHA and expecting people to take one gram per day became unsustainable. Plus, vegetarians did not feel comfortable taking a supplement that came from fish, but they needed omega-3s too. Then there was the whole issue of whether or not too much fish oil consumption caused cancer.

Researchers realized that the answer was to go to the source — the algae. They started looking into the microscopic algae that actually make DHA. Instead of getting the fatty acids from the fish that ate the EPA and DHA algae, they thought, start producing DHA algae and keep the fish out of it! This alga, they found out, can be raised on a farm and yield sustainable DHA that is also vegan, vegetarian, halal, kosher and organic. This algae-derived DHA is called algal oil, and it’s now added to food products to ensure that we get enough omega-3s in our diet in a sustainable and humane way.

The omega fatty acid DHA is essential for brain development during a healthy pregnancy. Studies have shown that when a pregnant woman consumes omega-3s, it improves the child’s development. Omega-3 requirements increase during pregnancy in order to aid brain growth, especially as it accelerates during the second half of pregnancy.

Researchers have used a variety of tests, such as general developmental milestones, problem-solving and language development, to assess neurodevelopmental outcomes among infants whose mothers were supplemented with omega-3 fatty acids compared with those who were not. A 2004 study conducted by Harvard Medical School and Harvard Pilgrim Healthcare found that higher maternal DHA consumption during pregnancy resulted in higher novelty preference on visual recognition memory and higher scores of verbal intelligence.

Animal studies have demonstrated that deprivation of omega-3 fatty acids, which is present in algae oil, during pregnancy is associated with visual and behavioral deficits that cannot be reversed with postnatal supplementation. This is why guidelines have recommended that pregnant women consume at least 200 milligrams of DHA per day.

The brain and eye are highly enriched with omega-3 fatty acids, which accumulate in these tissues during late fetal and early neonatal life. A scientific review conducted by the Agency for Healthcare Research and Quality (U.S.) states that “clinical research has only scratched the surface with respect to understanding the possible utility of the intake of omega-3 fatty acids as primary or secondary prevention in eye health.”

It’s known that there are very high levels of DHA present in the retina, and the role of DHA may be related to its biophysical effects on the cell membrane. It’s believed that DHA may modulate the activity of membrane-bound enzymes, which are responsible for the maintenance of cellular function. It may also regulate the receptors and kinetics of membrane transport systems.

Muscular degeneration is a condition that is age-associated vision loss and blurry vision related to damage to the macula, or center of the eye. This can be a result of aging, poor digestion, smoking, high blood pressure, exposure to UV radiation and a low-vegetable diet. A natural treatment for macular degeneration is omega-3 fatty acid capsules that contain DHA because it helps relieve intra-ocular pressure.

A 2012 study published in the Journal of Nutrition identified 11 randomized controlled trials with 485 healthy participants and evaluated the relation between algal oil DHA supplementation and cardiovascular disease risk factors. The results indicate that DHA supplementation from algal oil may reduce serum triglycerides and increase HDL cholesterol and LDL cholesterol in persons without coronary heart disease.

Omega-3 foods are important for cognitive development and function. The brain is made mostly of fat, and it functions especially well with high levels of DHA, which help the brain’s communication processes and reduce inflammation, which can help slow aging.

DHA is also required for the functional development of the brain in infants and maintenance of normal brain function in adults. The inclusion of plentiful DHA in the diet improves learning ability, whereas deficiencies of DHA are associated with deficits in learning.

Another interesting benefit of algal oil and other DHA foods is they’re able to reduce the symptoms of anxiety and depression. The European Journal of Neuroscience recently published a study earlier this year showing that oil containing omega-3s reversed all anxiety-like and depression-like behavior changes induced in rats. This is an interesting study because it stresses the importance of supplementing with omega-3s and DHA-rich oils at “critical periods of brain development,” which is why we should give it to our kids from early on to help them so they won’t develop anxiety or depression later in life!

Studies have shown that higher intakes of omega-3 oils significantly reduce the incidence of Alzheimer’s disease as well as vascular dementia; oils like algal also improve quality of life and memory in those affected by dementia.

Alzheimer’s disease is a brain disorder that progressively causes memory loss, dementia, and early mortality. Memory loss is caused when plaque forms in the brain.

Preliminary studies suggest that omega-3s may help improve symptoms of osteoarthritis and joint pain. Inflammatory bowel disease may also be relieved with omega-3 supplementation. Because people today, consuming the standard American diet, don’t boost their omega-3 intake to balance out the elevated omega-6s they consume regularly, there has been an onslaught of chronic diseases and inflammatory processes. By reducing inflammation, which is at the root of most diseases, with algal oil or omega-3 supplements, you place your body in a state that is conducive to healing from these diseases and other health conditions.

One inflammatory condition is osteoarthritis, which occurs when the cartilage between joints wears down, causing inflammation and pain. This type of arthritis generally occurs in the joints we most frequently use, such as knees, hips, spine, and hands. By reducing inflammation in the joints, algal oil serves as a natural arthritis cure, and it reduces swelling and pain significantly.

Another condition that can be treated naturally with algal oil is inflammatory bowel diseases, which generally causes severe symptoms, such as diarrhea or ulceration of the digestive tract. This illness can often be related to a number of other health conditions, including ulcerative colitis, Crohn’s disease, and leaky gut syndrome. Algal oil can reduce inflammation in the GI tract and serve as an IBS food treatment.

Is Algae Oil better than Fish Oil? Two major reasons why algal oil may be a better choice than fish oil supplements are because using fish for their oil is not sustainable and has a major impact on the oceans, and fish oil may include contaminants.

According to the United Nations, in the last decade, commercial fish populations in the North Atlantic region of cod, hake, haddock, and flounder have fallen by as much as 95 percent. This has prompted calls for urgent measures, some areas even recommending zero catches to allow for regeneration of stocks.

According to a Food and Agriculture Organization estimate, over 70 percent of the world’s fish species are either fully exploited or depleted. The dramatic increase in destructive fishing techniques worldwide destroys marine mammals and entire ecosystems. Studies have predicted that if the fish industry continues the way it’s going, there will be a complete collapse of world fish populations by 2048.

Fish can accumulate toxins such as mercury, dioxins and polychlorinated biphenyls (PCBs); plus, spoiled fish oil may produce peroxides. While a serving of fish may contain anywhere from 10 to 1,000 parts per billion of mercury, fish oil supplements have not been found to contain similar mercury levels because they’re typically purified. Studies show that unpurified fish oil supplements contain unsafe levels of environmental contaminants, but 80 percent of fish oil supplement companies verify that they have met the strictest U.S. standards for eliminating contaminants.

How does this differ from Omega 3 from flaxseed oil?

Many vegetarians and vegans are probably deficient in Omega 3 DHA due to the lack of fish in their diets. Flaxseed and other plant-based Omega 3 sources contain inferior Omega 3 ALA, which is not the same as Omega 3 DHA. Many studies have shown that Omega 3 DHA is vital for eye, brain and heart health.

Who should be supplementing with Omega 3 from algae?

Algae is ideal for both vegetarians and vegans, but also anyone that is looking for a more sustainable and healthier form of Omega 3. Given recent government guidelines on reducing fish intake whilst pregnant due to mercury poisoning, our algae soft gels are also a great health product for pregnant women

Recommended Dosage:
Recommended Intake – one capsule taken twice a day with water, preferably with a meal, as a dietary supplement.

Caution / Allergy Advice:
Store in a cool dry place out of sight and reach of children. Do not exceed the stated recommended daily dose. Food supplements should not be used as a substitute for a varied diet. 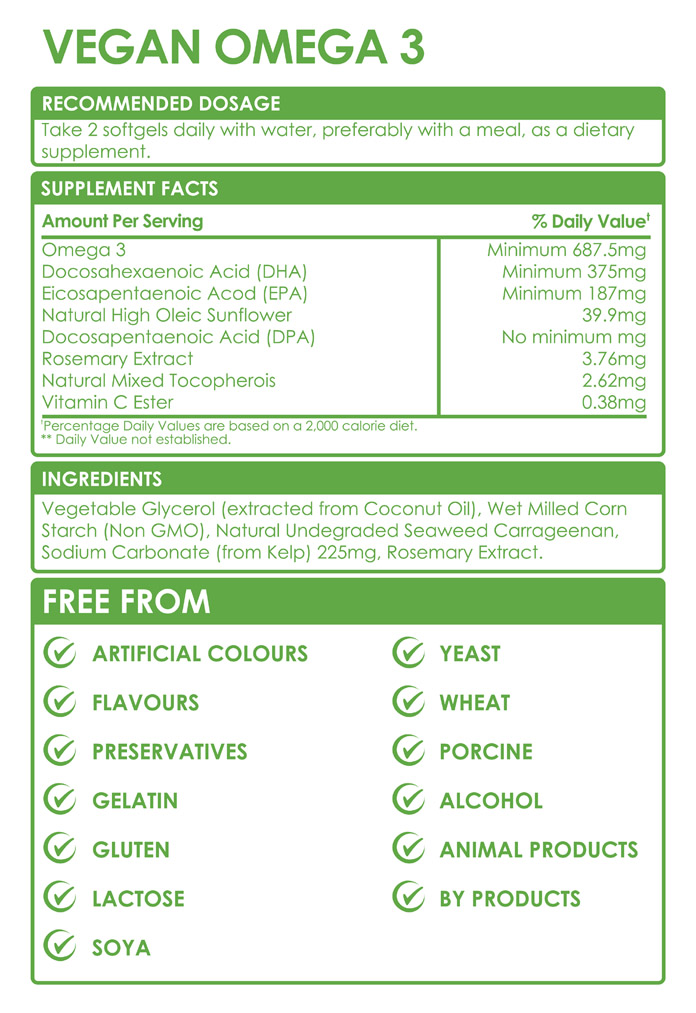